I met the paintball Duel King at a bar.

I was in college, and I danced danced danced with a friend who was another guy from my dorm. That night my friend, my bud, he was higher than Pluto when he let slip that he knew a man who ran a fight club that wasn’t actually a fight club, but a duel club.

“He’s over there,” said my bud, pointing to a stranger with a drink but no actual person for companionship.

So we went to accost him, and my friend said this Duel Man (the paintball Duel Man—what? Too pussy for the real the thing?) he was a winner, a king among plebes. Anyway, I played along, I feigned awe of my own. Our new companion, he reached his hand for a small red pill and soon, despite the supposedly underground nature of his club, he sang his own praises more than my bud and I combined. He pulled me near with fake-whispers, detailed how paired group members met in deserted locations wielding high-end, custom-engineered paintball guns. They shot each other from a mere twenty feet. There was no padding; the shots were a higher velocity than with a conventional paintball gun. The impact was brutal but not permanently debilitating.

And just like that, I wanted it after all: still a farce, but man-on-man, the hard hit of pain. Always, I hungered for each moment I fed from the tick-tock clock of living, coming too slowly, life too dull. I said I would meet him, when could I meet him.

The Duel King, though, he just laughed out loud. He said no, that’s not how it worked. Rather I must start at the nether regions of the pecking order where underlings mingle among their shared simplicity. He was master and champion; I was the dirt in his shoes. He ground his foot against the grimy floor to illustrate, which just made me want it more.

“I’ll make it worth your while,” I said.

“That’s what everyone says.”

“Child of hubris.” And he laughed once more, folding his long body over a long glass of drink, chipped white teeth in a hyena smile.

“Do it, then. Prove to me you’re not just a sycophant like the rest.”

I smiled inwardly because I could take him. Little did he know I was an expert with a gun. A paintball weapon couldn’t be so different.

“Maggot wants to be the mighty butterfly.” His voice became an effeminate whine. He flicked a lighter and lit a joint from his pocket. “Give me a date then.”

I said two weeks would be good. I had a summer class, but it would be over. No more obstacles to oust the old King, seize that title all for myself.

Four days after the bar encounter, a gun arrived to my dorm as promised. I unpacked it in the locked bathroom and hefted it, all black and snug in my grip. A little practice, I’d hit a flea on a fence.

The gun came with a note:

And of course that was the biggest fear: that I would shoot him straight and true, but then what? The rules to this supposed man-war were you shot until you knocked your opponent down, but you only won when he stayed ground-bound three minutes or longer. There was a timer on the gun. Shit.

His Royal Kingness was older than me and bigger. More than a contest of skill, this was a contest of bulk, and that was one of the many ways this joke of a fight went horribly wrong—

Two days later there followed another dorm delivery, this time with ammunition. Again, there was a note:

Yeah, fuck you, too.

The weird thing was that my buddy bud skittered farther from my company as the confrontation date approached. A few times he drew near enough to suggest I could still back out, concede without shame. It didn’t matter, he said, if I was a crack shot because the duels were really about the heart pounding, the lying in bed with aches of bruised flesh then rising at daybreak feeling more alive than ever before.

The Duel King, he said, reminded us of our vitality. In fact, people sometimes stayed ground-bound just because.

“Do you understand that?” he asked.

I heard him but what was this shit about just because?

After that conversation, I never saw him again; not such a bud after all.

There’s a story called The Most Dangerous Game. A man on a remote island grows tired of hunting mere beasts. He waits for gales; he takes in shipwrecked men and hunts them, instead. This intrepid character improves upon the mockery of combating animals who have bodies but no minds for defense. He transforms what was a charade into a challenge that’s real and meaningful.

When we meet this last time, the night is hot and windless. We’re on a road far from anywhere. The only light comes from a string of pale lamps.

“Star of nothing,” speaks the King, “are you cold?”

I wear slim leather gloves; they must seem ludicrous given the temperature.

I’d worried, actually, that he might not come, that my ex-bud fed him some crazy tale of dissuasion. But no, the King persevered, and now we face each other from twenty feet. The paintball gun is easy in my grip, and watching this man, I feel a great power of knowledge. A part of me wonders how he can stand fearless as he does, how he’s blind to the thrill in my eyes, the bulge at my waist that should tell him that I’m so much more than a boy with a paintball gun.

In his ignorance he raises his weapon, I raise mine in return. At the count of ten he pulls the trigger, expecting I’ll do the same—instead I hurl my gun to the ground.

My hand is still hurling when I stagger from the shock of being hit one time, two—such a volley I lose count and nearly fall before catching balance once more. I keep myself upright just barely, gasping with pain as my opponent’s voice rings through the stifling night air.

I look up; I fear I might faint from sheer agony. It’s so much more than expected, and I understand now why both parties are meant to fire at once. But gradually, in a slow-motion backward distortion, pain in my body turns to pleasure equally strong. I pull myself straight. I extract the real pistol tucked in my belt, the one that shoots red-hot fire of lead. My aim is true, my hand is firm. I align the sights and pull the trigger just as that foolish old King sees what’s coming. He steps sideways; he is too slow.

His body crumples in a new universe of surprise specialness.

I discard the pistol then, throwing it to the ground near the paintball gun. I go limp and fall, yielding to the rapturous thrall of physical suffering returned so hard it knocks the breath from my lungs. Asphalt becomes a new heaven of languor, and with time my breathing slows. Life becomes something incredible, an intricate and wondrous conflation of tiny, discrete events previously unnoticed. The sensation of physical existence grows measured and filled with exquisite minutiae. In a revelatory sensation, I experience myself as the sum of countless parts that are tactile, de-articulated, and astonishing.

Within the context of this newfound awareness, I grow aware of harsh breathing, not my own, that emanates from down the road.

I push myself to standing, slowly, then walk the short distance between me and that stupid old Man-King: the one who shipwrecked then washed ashore after thinking he’d boarded the safer vessel.

I step nearer but stop as my shoe touches a liquid that’s silky and black. The man lies motionless except for his chest and his eyes that catch mine in a wild-eyed horse stare. His right arm extends to the side. Near his open hand lies a cellphone. There’s an open call and I read the numbers at the top of the screen: 9-1-1.

A tiny voice emanates from below, too quiet to make out. Less quiet though, is a wail of sirens and when I turn my head there’s blue in the distance. I return my attention to the phone, pick it up and listen.

“Hello?” says the voice. “Are you still there?”

The man’s right hand begins to shake and he moves his fingers, I think trying to point in my direction.

Bubbles froth at his lips.

Cry of cars in the night.

I end the call and throw the phone down beside him.

His body convulses and I take a step back, approach from the other side to kneel on one knee, speak in his ear.

“Don’t disappointment me,” I say.

I would stay longer, but the sirens draw close. I return to standing, walk from the man on the ground. I sense rather than see his body, grinding against the pavement, struggling to get one last look at me—who triumphed, who made this night worthwhile like he never expected.

I take his paintball gun and mine, then collect the empty shell casing. I change my paint-spattered clothes and stuff them in my backpack. In the same backpack is a can of sprayable cooking oil to remove spatters from my face. Only my shoes remain. They are clean, but I change them anyway.

I arrived by bicycle, and I leave the same way. The frame makes a tiny squeak and the gears click softly.

Just a boy on a quiet road.

If I want to, though, I can find new sailors. I can do this all over again. No one will get in my way. 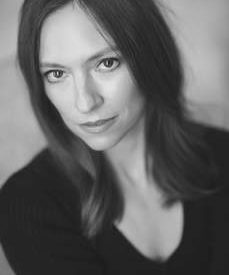 Liz Fyne has degrees in biology and neuroscience, and she spent over ten years working in biomedical research before she turned to writing fiction. She has three stories available in traditionally published anthologies. Additional stories are published in literary and interdisciplinary magazines. You can learn more about her at lizfyne.com. Follow her @lizfyne.