Daffy waits off to the side of the stage. He listens for his cue, the Rabbit shouting “is there a doctor in the house?” The scrubs are itchy and tight and he feels ridiculous with the stethoscope draped around his neck. He wonders if it is real but he would feel even more ridiculous putting it in his ears, pressing whatever the thing is called on his chest, listening for the soft bump of his own heartbeat. He wonders how much of his life has been spent in exactly this way, standing to the side, offstage, waiting for the Rabbit to show him up again, hesitant to even push at the fact of his own continued marginal existence.

“Cut,” the Rabbit says. He coughs, sits down, pulls on his whiskers in his fussy way, feels for the cigarettes in his pocket. Daffy has been clean and sober for a decade but he remembers the hangovers, the way they made every moment of the day a little harder, stranger, that feeling like he was tipping down a conveyor belt, everything just a hair faster than real-time.

The Rabbit is chatting with one of the production assistants. He has stopped even trying to hide his little masquerade. Masquerades. Since the Epstein news broke he has been different, though, quiet and hungover, careening toward some bad ending. Daffy is fairly sure he was a little drunk when they were filming the building inspector scene with the Pig. Something about his carriage, the way he kept on flubbing the monologue. The serenity to accept the things I cannot change, he thinks. He rubs at the token in his pocket.

Some of the corporate people are chatting with Jones off to the side. They seem to be showing up more regularly lately. He wonders if it is Epstein or after his brief paternity leave he is just noticing things he had not seen before.

Twins. A veritable flock. Their smell, warm and fertile and ancient, rises up in his nose and he swallows a sob. It is a strange side effect that nobody told him about: just about anything can make him cry now.

He sits down and studies his pages. Another one where they are playing on his real-life ascent and near miss, what the therapist insisted on referring to as his “station.”

Above the Pig and below the Rabbit, that is where he will forever live.

In the grocery store he noticed the Enquirer, another cover with a picture of the Rabbit and Epstein leaning up against one another, female arms draped over their shoulders, the picture cropped to shield the identities of the girls. The corporate people do not look happy, their mouths tight while they listen to Jones trying to make some kind of a joke.

He had wanted to direct at one point. He wonders if the short film is still on the laptop. He had wanted lots of things but now he knows that want is a cancer, expectation is a trick. He thinks about the twins and that smell pushes up into his mind again, the quick hiccup of a sob welling up in the back of his throat.

The Rabbit glances off to the side, scrapes at his cuticles. He looks old and tired. Scared. Daffy remembers that feeling, dried up, dying, and convinced there was only one way forward, trying to scratch that itch one drink, line, pill at a time.

He looks at the script. “Somebody call for a Doctor?” is his line. And then a pratfall. And then Rabbit Rabbit Rabbit lines. “This ain’t Cleveland, fella.” Another fall. Rabbit Rabbit. “Not if I can help it.” There was a time when he was poring over the scripts, making notes, trying to curry influence with the writers. He stuffs the script in his bag.

Last year the Rabbit finished fourth on Forbes’ “Most Influential People in Hollywood” issue. He is not proud that he knows this.

What they expect is for him to be jealous, insane with envy, driven to try to climb that ladder by any means necessary. That is the easy story, the expected reaction, those buttons so big and obvious they need not so much be pushed as smudged with a closed fist or accidentally stepped on like a cartoon bear trap.

They would be astonished, he knows, to learn that he is actually okay with all of this. He is fine. It is fine. Almost everybody in the world is below the Rabbit. And besides, the Rabbit clearly has his own issues.

He closes his eyes, imagines himself in his meditation nook in the Hamptons’ house. His zen place. One by one it all disappears: the stethoscope around his neck, the itchy scrubs, the executives and Jones and the Rabbit himself, each one slipping out of his consciousness until it is only him, only his breath, in and out, in, out, the sun peeking through the tall window in the corner, smudging the Buddha that sits off to the side, the feeling of the mat underneath his bottom, his fingers crossed against one another. In. Out.

“Okay,” the Rabbit says. Daffy opens his eyes and they are all still in their places. The executives sit down. Jones waddles back toward the cameras. The makeup woman finishes touching up the Rabbit’s face and he paws gently at her bottom before she retreats. He smirks, catches Daffy watching him, and winks. 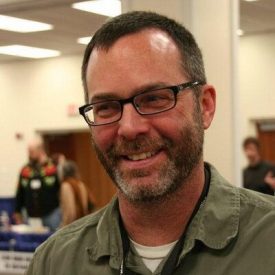 Dave Housley is the author of two novels and four collections of fiction, most recently the short novel Howard and Charles at the Factory. He is one of the founding editors and all around do-stuff people at Barrelhouse. He tweets at @housleydave. In real life, he is the Director of Web Strategy for Penn State Outreach and Online Education.