In memory of Tom Haggard

Were they tall terns? Or meant to be herons?

Lined along the sill of your big bay window,

as Christmas gifts for a dozen children,

birds facing iced panes as if seeing through,

down the hill and through the thin grove

to the pond where four months before

I caught my first sunfish off the dock,

my father nearby, at home in the silence

and attending to me to unhook the barb

from the translucent lip still pinched in my hand.

The sunlight glinting off the pond

made the thin veil of fish skin glow.

Returning to the house with my lonely catch

and a small tale to tell, you laughed so hard

you enlarged what I knew of the world’s embrace

and you told the one about flying your plane

all over this stretch of western Missouri.

You spoke my eyes wider.

What did the birds witness through the frosted pane?

What is this I caught from the sunfish glow?

Did you ever know that you were a land

where so much light crossed the thinnest space?

Or were you just offering whatever came

from a handful of words and a whittling blade? 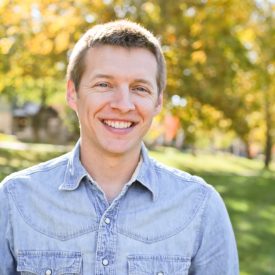 Andrew Johnson is the author of the essay collection On Earth As It Is. His work has appeared or is forthcoming in The Sun, Crazyhorse, Guernica, Commonweal, Image, and elsewhere. He lives in Kansas City, Missouri.