The road is called Blaire, and it runs through Blacklick, PA. Little Rachel divides the houses on Blaire Road into two categories: real houses, and fake houses. She lives in one of the fake houses—the kind you can put on a giant truck and haul down the highway. Her friends on Blaire also live in fake houses that smell like mildewed laundry. But she knows a woman in a real house too. The woman is very nice. Sometimes she lets Little Rachel and her family swim in the pool in her backyard. But the woman is sad because her only son was hit while riding his bike, and he died. He was 22. The person who hit him drove off without stopping. Little Rachel’s parents tell her this is called a “hit-and-run.” Sometimes, when she asks to go swim in the pool, her parents say no, because it will make the woman too sad.

The person who committed the “hit-and-run” was driving a white SUV. Little Rachel is told to be on the lookout for a white SUV with damage on its front. One day, while driving past one of the fake houses that smells like rotten laundry, Little Rachel sees a white SUV parked in the driveway. Her mouth drops open a little bit. She strains to see if there’s any damage done to the car.

She informs her parents about her discovery. They tell her that the neighbors didn’t hit the woman’s son.

A tired woman sits at the bar alone. She is thinking about how she’d really like to go smoke a cigarette. She sighs, letting her head drop to her hands resting on the dark wood. What she really wants is to go home; it’s only a mile and a half away. But that’s a mile and a half too far. She raises her head, sips her beer.

Country rock music plays. The man sitting two chairs down has dry, pink skin and hair so blond it’s almost white. People walk by, their shoes sticking to the beer-gummed floor: pluach, pluach, pluach. Nobody smiles, even when they laugh. Cold air blows in.

A short, barrel-chested man walks through the door. His round cheeks are red and his beard is knotted. He goes to the bar and takes the seat next to the man with dry, pink skin, clapping him on the back. He lifts two fingers. The bartender brings a beer. He drinks.

The tired woman’s drink is empty. She stretches. She has to pee. “Can you watch my stuff?” she asks. The bartender nods.

The tired woman returns to her seat and slides her arms into her coat.

“Cyclists are the fucking worst man,” says the pink-skinned man.

“Yeah and ya know what happened? The guy fucking—the guy ran into my car. And he like—he flew off of my windshield. His bike—his bike tore up the whole front of my car. It cost me thousands of fucking dollars to fix.”

The tired woman pauses. The barrel-chested man’s eyes bulge as he talks, his shoulders so tense they rise toward his ears. His speech is fast and slurred, hands gesticulating wildly.

She turns and walks to the door, her shoes peeling loudly off the floor. Outside, cold air hits her face. And in the parking lot: a white SUV.

She pulls out her phone. 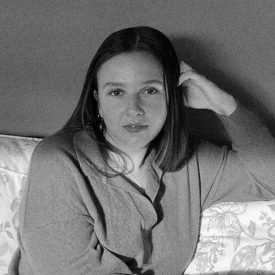 Rachel Mikita is a writer, actor, and artist from Pittsburgh, Pennsylvania and Flint, Texas. She graduated with a BA in Liberal Arts from Sarah Lawrence College with concentrations in theatre, creative nonfiction, and anthropology.