The original Blob was filmed in my hometown. So every summer we host Blob Fest—a weekend long re-enactment of the film, culminating with a screening at the drive-in and 4th of July fireworks. During the weeks leading up to the festivities, the local cops round up the vagrants and toss us in the drunk tank so we won’t bug the tourists. Last summer, I sat for three weeks in a holding cell with a dozen or so homeless and mentally ill residents. At lunch time we’d pull the cheese out of our sandwiches and fling it up at the ceiling where it stuck and hardened. There was a whole layer of it up there by the time they let us out.

Right now, I’m walking my loop, waiting for midnight when my card will get money on it. My route is a two-block circle. It takes me a little close to the cop station for this time of year, but this is my route. And it’s been mine since before the police moved to this side of Broad Street and away from all the crime. Fuck them anyway, I’m not even homeless. I just can’t stand to sleep at my house anymore.

When I absolutely need a place to sleep indoors, it’s Daisy’s. She stays with her grandma in a senior living complex. It’s still hard to sleep there. I get thinking and can’t turn it off. Sleeping outside keeps me too concerned with my safety to worry about much else, and I can eventually pass out. My favorite spot is in the first base dugout of the softball field behind the abandoned junior high. The infield is all overgrown and there’s a rusted backstop behind home plate, a big hole in the batter’s box that fills up with rain. When I get bored I throw flowers in the puddle and watch them float.

I can see the school in the distance as I walk back up Main Street. When I get to the fountain by the park, I splash water on my face, swallow a little and spit out the taste of pennies. At the bus stop on the corner of Main and Broad, a man loosens his tie and lights a cigarette. His face is familiar but I can’t place him, and it bothers me.

He watches me as I head back the way I came.

Near High Spirits, I rip a Blob Fest flyer off a telephone pole and stuff it in my back pocket. And I keep walking and waiting for midnight when I’ll have money on my card and I can get something going. After I get money on my card, I’ll trade my food stamps to my guy by the hospital and meet up with Daisy, if I can find her. Usually I find her. It’s not that big a town.

Sometimes while I’m out walking, I see my ex around. And it looks like she’s doing good for herself, and she either doesn’t recognize me or pretends not to. Mostly I’m grateful for that, but sometimes I can’t stop thinking about how two people can spend all that time together, and then not.

After few more laps, it’s midnight and I’ve got my money on my card and I trade my food stamps to my guy by the hospital and head back to High Spirits. Of course there’s Daisy sitting alone, nursing one of those fancy umbrella drinks. She’s so pale; her skin looks pink under the neon red Budweiser sign. I tell her I’ve got a decent-sized rock in my cigarette pack and before long we’re back at her place.

The air is thick with the smell of cat piss. Her grandmother has real bad OCD and won’t throw anything away, so Daisy is constantly shoveling crap out of the house and dousing everything in Lysol and bleach. “It is tiring,” she says, “I’m always so tired.”

Daisy’s grandfather is dead but he left all his pain pills. Up in the attic, Daisy puts on a record and uses the hotplate by the stereo to turn some of the pills into liquid.

We shoot the pain meds and walk out on the balcony.

Under a dim orange light down in the courtyard, an old lady on a scooter veers into the grass and gets stuck in the mud between a bench and the curb. She can’t get back on the sidewalk. Thud off the curb, reverse, thud off the bench, forward, thud off the curb, repeat, and we watch her until the music stops and we have to go back inside to change the album. When I bend over to flip the record, Daisy pulls the flyer from my back pocket.

I grab the paper and hold it close to my eyes. “I should go.”

Daisy lights a cigarette. She says, “You’ll have to clean yourself up.”

“I can give you some of Granddad’s old clothes.” Daisy sprays Glade in a big arc above us. I feel the light mist settle wet on my arm hair, and we sink deep into the couch.

By the time I get off the couch, it’s lights out.

The suit Daisy gives me smells of dead skin and ointment. The pants are too big. I comb my hair then we smoke crack and head to Blob Fest tryouts.

We show up at the building where they hold the auditions, and wouldn’t you know it, the guy sitting there in the director’s seat in that stupid tie is the same guy from the bus stop. Then I remember: I let him blow me for $20 a couple months ago in the back room at High Spirits. I realize it. He must realize it. Then we both realize the other also realizes it. He fumbles with his clipboard. Nervous. Like he thinks I’m going to stand up on a chair and announce it to everyone. Then Daisy walks up to the guy and kisses him on the cheek. And she says to him, “Ted, this is my dear friend, who I love very much, and wouldn’t you please give him extra special consideration for the part?”

Ted taps his chin with his pen like he’s giving it some thought. Then he says, “Yes. He has just the right look.”

And with that, I’m in Blob Fest.

That night I walk past the fountain, all the way up the twisty back roads on the far side of Broad Street, between the park and the drive-in, and take a look at my house. From the edge of the driveway, I can hear the tarp covering my old Ford shudder in the wind.

On clear nights like this one, me and my ex used to walk up the hill in the backyard and sit under the crabapple tree overlooking the cemetery. We’d stay till sunrise, getting high, throwing the little apples down at the statues of angels.

The next evening, after what I thought was a strong rehearsal all around, Ted comes up and puts his hand on my shoulder. Everyone else has left for the night.

“Hey, Ted, that’s great, but not interested. I just want to be the best Doc Hallen I can be.”

He leans close like maybe there’s more going on than I realize. With delicate fingers he reaches out and fixes my collar, pushes stray hair from my eyes. “I want you to know that I’ve been saved. Not only am I not on drugs, I’ve suppressed my more basic urges. I’m happily married, again. My family loves me. I would hate for you to miss out on what I have.”

He sits down. I sit down. Just the two of us on the floor of the big empty room.

“Really, it’s okay.” My leg starts to jitter and I’m thinking about all those oxys at Daisy’s place, and my guy by the hospital, while Ted goes on and on about how some preacher at a truck stop congregation saved him. I pretend to get interested. I ask him for a brochure which I fold in half and stuff in my pocket. And we’re still just sitting there. Street lights angle through the dirty windows puddle on the tile. It’s late and there’s nowhere I need to be. I’m jealous of Ted, and I know he’s lying. For a second I wonder how it would feel to smash his face of the floor. I’d go back to jail, but least I’d have earned it. When I look closer, I can tell he’s sad, and I feel guilty for thinking about the sound his head would make if I bounced it off the tile, how it would echo.

“Now I need you to scream,” he says. “Scream like the Blob just swallowed up everyone you love.”

I push myself up off the floor and inhale deep and I’m ready to let loose, but I can’t gather enough air to fill my lungs. 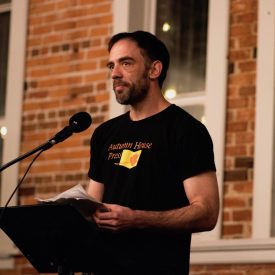 Ben Gwin is the author of the novel Clean Time: The True Story of Ronald Reagan Middleton (Burrow Press). His writing has appeared in Belt Magazine, The Normal School, Gulf Stream, and others, and been anthologized in The Pittsburgh Anthology (Belt Publishing) and Voices of the Rust Belt (Picador). Ben grew up in Titusville, New Jersey. He lives in Pittsburgh with his daughter, and is currently working on a nonfiction book about parenting and the opioid crisis. Please give him a grant.