Dustin Pearson’s debut, A Family is a House, is a page-turning collection of poetry detailing how one’s body houses domestic abuse. Its narrative format follows four brothers and their abusive father. Each poem portrays a different aspect of violence, reflecting how each speaker compartmentalizes their abuse. The poems dip into magical realism and detailed imagery of the human body, carrying themes of masculinity, inheritance, and dissonance.

Pearson drifts between reality and fantasy to cleverly depict the complexities of abuse in a straightforward, understandable way. Multiple poems describe the narrator’s brother growing a tail: “Me and my brother Bernie / would jump rope with Brother’s tail until Dad / would come out and beat us with it.” The tail symbolizes how an outsider might view the violence as an abnormality, while victims often grow up with a normalized perception of violence—which adds to the tension and shock of the book. The images of carnivorous animals embedded within the collection also contribute to the sense of danger within the speaker’s world. The poem “Autobiography” begins with “I was taken in by two wolves whose whole diet was bacon. / Each morning we shared the nine packs of bacon we fried then ran.” This poem shows how an abusive relationship holds a dynamic similar to predator and prey, making me feel uneasy as a reader. It also eerily parallels other poems describing the family having breakfast together, knowing violence would come later in the day, mirrored by the reference to running after eating bacon.

Integrated with the narration are stunning images of human anatomy, often manifesting as gruesome snapshots of flesh and blood. Pearson utilizes this technique to draw on the fact that when physically abused, the psychological damage is the most palpable, yet the most invisible. The narrator details,

Even though it’s vitals
of my own body, I continue to watch.
Do nothing. Imagine all of the oceans
murky and blood thick.

This passage carries a tone of numbness, even though bleeding is often a painful thing. This painlessness reflects suppressing an emotional pain as vast as the ocean, which is heartbreaking. Another poem particularly caught my attention, where the narrator describes growing older and his body beginning to resemble his father’s: “When you eat, / it’s his lip that will curl around the food, / though it will be your body he nourishes.” This opened my eyes as to how abuse is passed down in a family just like physical traits are—the psychological impact leaving a permanent legacy.

A Family is a House provides a compelling insight into an abusive household, tying in the idea of what a “home” is and how we hold and house our abuse. Domestic violence is often invisible and complex, but Pearson crafts artful language that unravels violence for all to see and understand. He captures it all: what it’s like to listen to your mother be beaten, what it feels like to be beaten yourself, and all of the remorse and pain that you carry because of it. Though a quick read, the collection sits with me, honest and hard to forget.

A Family Is a House was published by C&R Press in March 2019. To find out more about the title, visit their website here. 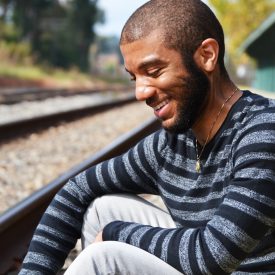 Dustin Pearson is the author of Millennial Roost (C&R Press, 2018) and A Family Is a House (C&R Press, 2019). He is a McKnight Doctoral Fellow in Creative Writing at Florida State University. The recipient of fellowships from Cave Canem and the Virginia G. Piper Center for Creative Writing, Pearson has served as the editor of Hayden’s Ferry Review and a Director of the Clemson Literary Festival. He won the Academy of American Poets Katharine C. Turner Prize and holds an MFA from Arizona State University. His work appears in Blackbird, Vinyl Poetry, Bennington Review, TriQuarterly, and elsewhere.