“Just one? That’s nothing. Where I lived before, six were killed.”

Behind the convenience store,
beyond the dumpster, a path
begins so narrow it explains
how it’s walked only single-file
by the brain-damaged who travel
daily from the state-sponsored school
for the impaired, those who have etched
a permanent route through weeds
and underbrush out of love
for a cheap buffet of sugar.
They crowd the aisles to choose
packaged cakes and candy; the clerks
know to check their pockets for theft.
Cleared, they order the Big Gulp
soda cups and rush outside
to celebrate their sweetness.

In chapter one, the history
of the soft drink, Joseph Priestly,
who discovered oxygen, lived
near here. Because he hated waste,
he salvaged brewers’ bubbles,
forced them into bottled water
and created soda. Someone,
in chapter two, added sugar,
someone else stirred in cocaine.
People paid to gargle it
like medicine that promised
“to whiten the teeth, cleanse the mouth,
cure tender and bleeding gums.”

Two miles from this check-out line,
the landscape held a sycamore
like a super-sized soft drink cup,
the narrow road humped where it swept
into a curve. My son’s friend,
he said, was wearing his blue
and silver college sweatshirt,
clutching a can of soda
when her speeding car went airborne.

That road, this summer, was straightened,
the thick, ancient tree removed,
the curve so shallow now that
the years-old crash must rely
upon oral history
for its details, the site blurred
by the unreliable
who point and say only “there”
and “tree” and “speed” until that girl
suffers only a type of death—
foolish or accidental
or avoidable on a list
between suicide and drugs.

For years now, new residents
have been forbidden by the state.
These are the last to live here,
the middle-aged and elderly
phased out by sickness and death,
some buildings, already, rented
and employed by those able
to arrive and leave by car. 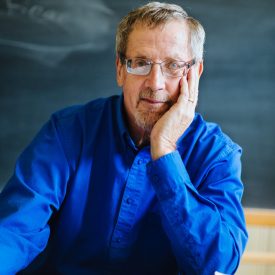 Gary Fincke‘s latest essay collection The Darkness Call won the Robert C. Jones Prize (Pleaides Press, 2018). The Mayan Syndrome, a new collection, will be published early next year. It will include “After the Three-Moon Era,” which was selected to appear in Best American Essays 2020.